Telekinesis also called Psychokinesis is the paranormal ability to move things with one's mind. It can also be channeled through the eyes or hands. Users can freely manipulate the movements of all matter with their thoughts. Objects may be far away or inside the body. Some may be as large as planets or as small as atoms. Some users may be able to levitate themselves, or very large items. Users may or may not be limited on size or complexity but this is usually dependent upon their own imagination.

Telekinesis is a power commonly used by psychics, witches, demons, angels, and ghosts, among other abilities such as spell casting and manipulation of the elements in nature. This power can be used to move, lift, throw, push, pull and manipulate objects, humans, animals and virtually anything within the realm of physical molecular structure (and possibly beyond) in various ways.

Emily using the ability whilst possessing Bonnie. (click for animation)

To throw Damon across the room

Sarah using telekinesis to cause the pencil to stand. (the Craft) 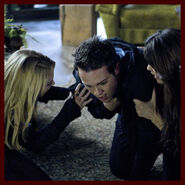 Carrie levitating her books and bed.

Carrie shielding herself from a car. Click for Animation)

Caleb and Pogue using telekinesis to defy to gravity.

Mary uses this power to shatter the mirror

Add a photo to this gallery
Retrieved from "https://unnaturalworld.fandom.com/wiki/Telekinesis?oldid=16796"
Community content is available under CC-BY-SA unless otherwise noted.