Pyrokinesis, or Fire Manipulation, is the ability to create, absorb and manipulate fire and heat.

The ability to control fire is a powerful and destructive one, not to be taken lightly. One with this power could produce vast amounts of fire, both for offensive attack and defense (fire walls for example) or for generating a light source. One could also manipulate heat, radiation, volcanic activity, spurts and blasts of flame and even lava or magma. Fire is commonly employed for total destruction purposes.

Beings that have this ability

Fire can vary in intensity and flames, and such is the power. It is the ability to manipulate heat. It is a sub-element to fire.

Fire Breathing is the act of making a plume & stream of fire by creating a precise mist of fuel from the mouth over an open flame. Regardless of the precautions taken, it is always a dangerous activity, but the proper technique and the correct fuel reduces the risk of injury or death.

Fire eating is the act of putting a flaming object into the mouth and extinguishing it. A fire eater can be an entertainer, a street performer, part of a sideshow or a circus act but has also been part of spiritual tradition in Indi. 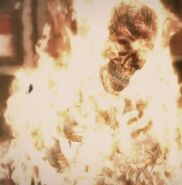 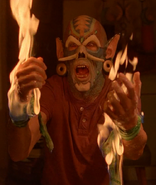 Charlie setting a man on fire

Regina forming a fireball torwards the charmings in season, 6, episode 20 the song in your heart.
Add a photo to this gallery
Retrieved from "https://unnaturalworld.fandom.com/wiki/Pyrokinesis?oldid=17711"
Community content is available under CC-BY-SA unless otherwise noted.