When man began to multiply on the face of the land and daughters were born to them, the sons of God saw that the daughters of man were attractive. And they took as their wives any they chose. Then the LORD said, "My Spirit shall not abide in man forever, for he is flesh: his days shall be 120 years." The Nephilim were on the earth in those days, and also afterward when the sons of God came into the daughters of man and they bore children to them. These were the mighty men who were of old, the men of renown. (Genesis 6:1-4, English Standard Version)

Nephilim is a race of beings who are half-human and half-angel. They can be the children of human and angels, who initially appear to be perfectly normal humans, or they can be combining angelic energies with the human soul.

They rarely contract any childhood diseases, however, and sometime between the ages of twelve and eighteen they experience amazing abilities. They are strong, fearless and intelligent, charismatic, attractive, and confident to the point of being arrogant. The majority of Nephilim live peacefully among full humans while hiding their dual heritage from the human world.

Many Nephilim use their abilities to hunt rogue supernatural creatures. These Nephilim also serve as a kind of police force to enforce the Covenant and keep the peace between Angels, Vampires, Shapeshifters, Fairies, Demons, Witches, Deities, and all who they refer to as Supernaturals.

The Children of God looked down upon the humans of earth and they found them fair. But it was forbidden for the sons of God to leave Heaven and walk the Earth. They were overcome with lust for the daughters of men and they greatly desired them. And so a group among them conspired to leave Heaven and go down to Earth.

They left their place from on high. They left the gates of Heaven behind them, and they descended to the Earth. Those who left the hosts of Heaven to walk upon Earth among men became known as the Nephilim. Such children, and their descendants. The Nephilim however were far too powerful for their human mothers. As a result the mother of a Nephilim died during birth.

To show their acceptance of the Nephilim they gifted them with angel life spans and human souls. They also allowed the fallen angel's powers to be passed down to the Nephilim, however, were generally not able to be accessed until their 18th year.

The sons of God took to wife the daughters of men and they impregnated them. The children were part divine and part mortal and they grew rapidly and to great stature. Their bodies were fair and smooth of limb-like their angelic parents, and their minds were keen. Their eyes looked upon the worlds of both Heaven and Earth. The mysteries hidden from men were revealed to their divine sight.

When God looked down upon the Earth, he saw men living like gods. The Lord grew angry. He saw that men no longer poured the blood sacrifices upon the altar but kept the life of the blood to increase their own strength. He saw the men with the tools of the gods, making the Earth bountiful as only the gods should do. He saw them piercing the mysteries of the heavens so that their knowledge of themselves and their world rivaled that of the gods. And he saw them with great weapons of war, weapons which only the gods kept for themselves, and he grew afraid.

And so God undertook to punish the Nephilim and wipe their seed from all the Earth. Yet they had so intertwined themselves with the children of men that nearly all men bore the Nephilim's taint. So God hardened his heart against all mankind and therefore determined to kill every last one.

The physical characteristics of Nephilim tend to vary, however, they are generally revered as unearthly beautiful people. Most of these Nephilim simply appear human in form with minor angelic traits, unique natural eye or hair colours similar to that of their parents. There are two types of Nephilim depending on how they are created:

These Nephilim are the offspring of a human and an Angel inside a vessel. They have Angel DNA in their bodies and are an extremely rare occurrence. Any Nephilim that is discovered by Heaven is ordered to be shattered. This type of Nephilim is the main topic of this article.

Shadowhunters are Nephilim that weren't originally born as such but were created by drinking the blood of Raziel, an angel who saw them as an asset for Earth's safety from dark forces. Due to the contempt Heaven holds towards Nephilim, Raziel gifted the Shadowhunters with warded Institutes all over the world, and special magical Runes to aid them in battle and protect them from the wrath of Heaven. Despite being much more common than Natural Nephilim, Shadowhunters are largely unheard of in Heaven or on Earth due to Raziel's protections. often require to use angelic rune based magic to access their angelic powers due to them being more human than angel.

Like their parent races, Nephilim are biological lifeforms not unlike many other creatures in the universe. However, their divine parentage does afford the Nephilim powers beyond anything a normal being is capable of, and the irony of carrying both holy and unholy energy within themselves is an intrinsic part of their existence. Though their powers can make them extremely dangerous if provoked, most have intelligence equal to that of a human.

Nephilim are identical to humans in most ways. They eat and drink the same things, and perform all the same biological functions. They have the same lifespans as ordinary humans. If a Nephilim mates with an ordinary human, the child will be a Near-Mortal Nephilim. The children of two Nephilim will also be Nephilim. Thus, there are many Nephilim who are many generations removed from contact with Celestial Beings.

Nephilim sometimes have glowing eyes like an angel, although their glow is somewhat dim and grayish in color as opposed to the bright white or bluish-white glow of regular angels.

They give off a very distinctive smell to angels and demons that is considered repulsive to the most stringent of both classes, which makes them easy to track.

Nephilim also have a higher body temperature than human.

Nephilim grow up with a sense of entitlement, and a strong impatience when they don’t get their way. Adult Nephilim are frequently viewed as egotistical, even megalomaniacal.

Nephilim do everything on a large scale. They are prone both to acts of great heroism, and massive evil. When Nephilim build structures they always endeavor to make them as large and imposing as possible. Nephilim love to build palaces with myriad rooms dedicated to single activities. They prefer to take many lovers at the same time rather than settle down with a single mate.

Nephilim generally don’t like having limits on their own behavior, although they frequently have no problem with imposing them on others. They are drawn to positions of command and power, or else they become wandering heroes who swear allegiance to nothing but their own glory. Many Nephilim will create cults around themselves, and gleefully accept the adulation and even worship of ordinary humans.

Nephilim tend to be good. They look for the good in everyone around them. Many become paladins. Some Nephilim have no tolerance for evil at all, and will happily join up if the local church calls a Crusade. There are a few evil Nephilim, but they are rarely seen.

Nephilim often love to hunt, and are renowned for their bravery and ability to bring down large and dangerous prey. Many Nephilim make their living hunting monsters, and may decide to adventure simply for the opportunity to kill dangerous beasts (and be seen doing it).

Despite their ancestry, Nephilim are never of Lawful Good alignment.

In their own nations, Nephilim have human-like societies, except that everything will seem exaggerated to the eyes of ordinary humans. Holidays last longer and are more intensely celebrated, the cuisine is more intensely spiced and flavored, the costumes worn by people are more elaborate, the titles of nobility are excessively long, the architecture is grandiose, and simple events like a casual greeting can become the basis of lifelong feuds.

In some places, Nephilim have established themselves as a noble class ruling over ordinary humans. In those places the noble culture will seems as ostentatious as that of a Nephil nation, although such extravagance may not be reflected in the way the ordinary people live.

Sometimes, Nephilim don’t even fully realize what they are until something life threatening or life changing happens and something just ‘clicks’. So, if you came here to find out if you are a Nephilim or near mortal Nephilim, keep track of this list!

2: Like we said earlier, brown hair that had a reddish, goldish, to it in the sun.

3: Speed. You may have already been faster then others around without noticing it.

4: You are adopted or don’t know who your real parents are, especially the father.

5: A fast Metabolism. Keeps you in shape and you can usually eat whatever and whenever you want.

6: Pointy ears. Not talking about elf ears from Lord Of The Rings, just a little point.

7: Tall. This isn’t for all Nephilim, but definitely some!

8: You can sense certain things happening around you.

Angel Physiology: Although outwardly they appear to be ordinary humans, Nephilim are bestowed with celestial powers that they inherent from the angelic parent. All Nephilim have a powerful charisma, but are otherwise indistinguishable from a human. They are often fast and strong beyond the limits of human ability. Some Nephilim might show this strength in intelligence or leadership ability instead. Whatever their strengths, Nephilim are very aware of their surroundings, and are generally excellent at reading people. Although they are mortal, Nephilim will not sicken, and tend to live longer lives than normal humans. Aside from this, though, they are essentially humans, with all the weaknesses that entails.

with his angelic wings 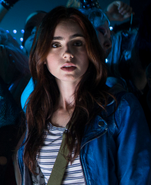 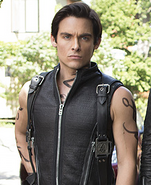 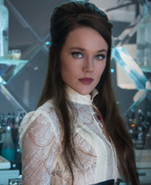 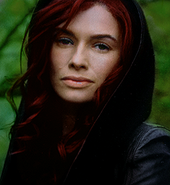 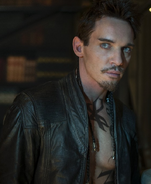 Waverly Earp (Wynonna Earp)
Add a photo to this gallery
Retrieved from "https://unnaturalworld.fandom.com/wiki/Nephilim?oldid=24543"
Community content is available under CC-BY-SA unless otherwise noted.