A mermaid or merman (pl. merfolk, or specifically mermaids and mermen) is a legendary aquatic creature with the upper body of human and the scaly tail and fins of fish.

Despite their stunning beauty, mermaids are extremely dangerous and they have the power to decide the fate of any ship they come across

Merfolk are related to the sirens and are very similar. In most myths, merfolk use the combined power of their beauty and voice to lure men into the sea, either to bring them down to live in the merfolk realm to quell their loneliness or to drown them out of humour or spite.

Some merfolk are benevolent and have been known to rescue drowning humans, while others are monstrous and have a taste for human flesh and blood. Sometimes a mermaid will fall in love with a human. However, the land and sea are two different worlds. Tales of mermaids who tried to overcome this great divide usually end in sadness and heartbreak. Known examples are The Little Mermaid, Pania of the Reef and Ondine.

Mermaids are mysterious beings whose nature varies from mermaid to mermaid. A common mermaid trait is vanity. They often perch on the rocks to comb their flowing curls and love to gaze upon their fair reflections. They are also proud and easily offended. They can become very vicious when angered. A princess was nearly destroyed because her mother claimed she was fairer than the mermaids. Some mermaids are as cold as fish and act icy towards other beings. This does not extend to their own kind as they care deeply for each other. When one is hurt, many mortals, including the offender pays the price.

Mermaids are strong, independent and powerful beings but they can be benevolent. Some rescue mariners from the drowning and others fall in love with humans. Mermaids are more curious about the world above than mermen and will shed their true form to dance on the beach or attend human festivals. Though they can be very cruel, merfolk always help those who have helped them. Those who have dealings with the merfolk do so at their own peril. They can also live for more than 300 years.

Both mermaids and mermen are a hybrid of human and fish with the heads and torsos of humans and the lower bodies and tails of sea creatures. Mermaids are exceptionally beautiful with pearly, glass smooth skin with a strange luminescence, coral coloured lips and shining eyes of ocean blue or green. Soft, silky hair flows down their backs in slight or many waves like the sea or thick curls like seaweed. Mermaids vary greatly in appearance and coluring but they all possess an enchanting and other-worldly beauty. Mermen are considered less attractive compared to their female counterparts but many have a fearsome and intimidating beauty with cold eyes, powerful muscles, and skin as cold as a fish's with a greenish tinge.

Just beneath the belly button, a mermaid's body becomes akin to the body structure of manatee or blue whale but slimmer and elegant. Most tails are at least two metres long or more and end in huge, horizontal and semi-transparent flukes. A short dorsal fin runs down the length of their tails. Like a fish, their tails are covered in shimmering, iridescent scales. For mermaids, scales cover them from their waists to their fins, replace their fingernails and cover their breasts while scales coat a merman's entire body. Thin and translucent webbing connects their fingers. Merpeople vary greatly in color with scales ranging in hue from blues, greens, and violets to reds, coppery-orange, and golden-amber. Mermen generally have cold-colored scales while mermaids can be any hue. 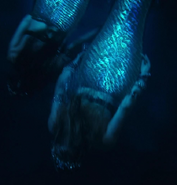 Add a photo to this gallery
Retrieved from "https://unnaturalworld.fandom.com/wiki/Mermaid?oldid=17974"
Community content is available under CC-BY-SA unless otherwise noted.